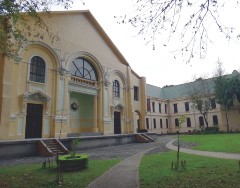 After the retrocession of Taiwan in 1945, the Taiwanese Government took over the former Japanese education system, and Taipei Imperial University was recognized according to our University Law as National Taiwan University. To promote medical education and to raise the standards of its graduates, the one-year premedical course was increased to two years in 1949. In 1951, with the donations from the United States Aid Missions to China, NTUCM began to send faculty members to the United States for further studies and invited American consultants to improve teaching and research in Taiwan.
With substantial improvement in the laboratory and library facilities and the recommendations of the American consultants, the curriculum for medical students was reorganized and the teaching methods were modernized. In particular, the proportion of clinical teaching was increased and the Clerkship System (or Block System) was adopted in 1952. The current medical curriculum in the School of Medicine, leading to the degree of Doctor of Medicine, consists of 7 years of study and includes 2 years of premedical studies, 4 years of medical courses and 1 year of rotating internship.
To meet the urgent needs of our country, the following six schools of allied health sciences were established within the College of Medicine (28 departments): Pharmacy (a 4-year course, established in 1953), Dentistry (a 6-year course, 1955), Nursing (a 4-year course, since 1956), Clinical Laboratory Sciences and Medical Biotechnology (a 4-year course, 1956), Physical Therapy (a 4-year course, 1992), and Occupational Therapy (a 4-year course, 1992). In addition to these 7 schools, 23 graduate institutes and 4 research centers as well as the Laboratory Animal Center (1990) were established for facilitating the development of advanced study in medical sciences and for the promotion of research in medical fields. The 4 research centers are the Center for Optoelectronic Biomedicine (1987), the Cancer Research Center (2000), the Drug Research Center (2001) and the NTU Center of Genomic Medicine (2003).
The College is led by the Dean. Its organization includes teaching and research units, administrative offices (Office of Academic Affairs, Office of Students Affairs, Office of Medical Education, Office of Medical Research and Development, Office of Medical Informatics and Laboratory Animal Center), supportive offices (Dean's subordinate office, Secretariat, Personnel Office, Accounting Office, Office for International Affairs, General Affairs Office and Medical Library) and subordinate institutions (National Taiwan University Hospital and Preparatory Office of the Children's Hospital). The University Senate determines the university's organization, rules and regulations as well as implements teaching and research development programs made at meetings of committees of different levels. The related administrative and supportive offices are responsible for the implementation of the resolutions.
Website
https://www.mc.ntu.edu.tw/ntucm/Index.action