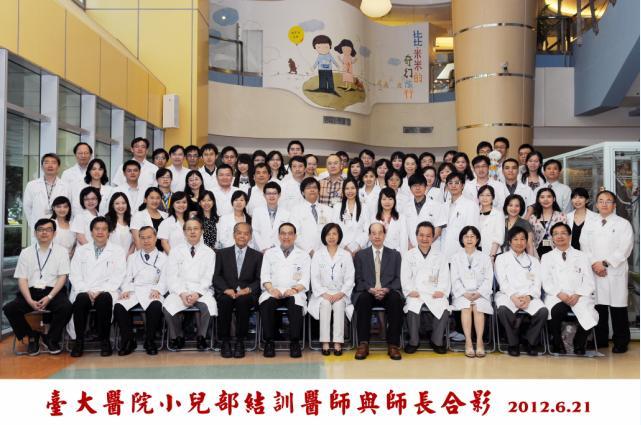 The Department of Pediatrics of the National Taiwan University Hospital (NTUH) provides comprehensive care for all new borns, infants, children and adolescents.

Our faculty are also engaged in a wide variety of research studies, ranging from basic laboratory-based studies to clinical disease-oriented investigations. Writing medical articles is also an important part of residency training in our department and it inspires many young doctors in medical researches.

Taiwan Hospital was founded in 1895, and renamed as Taipei Hospital the next year. In the beginning, there was only Internal Medicine for both adults and children. In 1906, when Taipei Hospital was remodeled as Taiwan Government House Taipei Hospital, the Department of pediatrics was separated from the Department of Internal Medicine and Usuki Saika was the dean then. In 1919 the College of Medicine remodeled as Taiwan Government Medicine Specialized School. In 1921 Togawa Tokufu took the position of the dean of Pediatrics Unit. He was also a teacher, specializing in Pediatrics. That was the beginning of Pediatrics teaching. He resigned in 1922, and then Yasui Keinosuke became the dean and the professor of Pediatrics Unit. When he went on a Europe for researching, Sakai Kiyoshi took his place to be the dean of the Unit.

The College of Medicine, Taihoku Imperial University was established in 1936, and remodeled as Taihoku Imperial University Hospital two years later. Pediatrics Classroom was founded then. Sakai Kiyoshi was the first classroom director, and Murakami Katsumi was the assistant professor. Huo-Yao Wei returned from Tokyo to serve as the instructor of the medicine specialized school the same year. It was the first time that a natire Taiwanese took part in pediatrics teaching. Following Taiwan's retrocession to Chinese Sovereignty in 1945, Taihoku Imperial University Hospital renamed as National Taiwan University Hopital. Sakai Kiyoshi was required to remain his former position. He returned Japan two years later, and Huo-Yao Wei took his position to be the director. Jong-Lin Chen, Rui-Yun Syu, Ting-Jian Lee, and Jong-Hui Chen intermittently joined the team of pediatrics teachers.